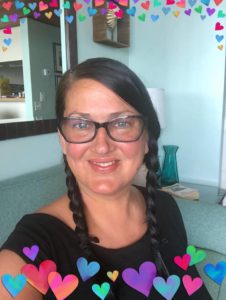 Stephanie was born on the unceded territory of the Snunemuxw mustimuxw (Vancouver Island). Her mother and her grandmother, keeper of stories, where born in the Historic Métis Community of Lac La Pluie / Fort Frances, Ontario. It was also known as Fort St. Pierre, a historic fur trading post and base for LaVerendrye’s westward explorations in 1731-1758.

Stephanie’s great grandmother was a sage femme born at Knife Falls on the St. Louis River, Minnesota. This is the site of the historic Grand Portage of Fond du Lac on the St. Louis river whose trails led to the Red River, Manitoba. Fun fact - Stephanie’s great grandmother delivered her immigrant Norwegian great grandmother’s children.  In Quebec, Stephanie has ties to St.Regis/Akwesasne, the Petite River Nation,  the Hurons of  Lorette,  Rivière Rouge( L’Annonciation ), Maniwaki and is a descendant of many of the Bois Brulé, coureur des bois, interpreters, explorers – back to the beginning of Acadia and New France which at that time stretched all the way down to Louisiana.

Stephanie works full time and is engaged in a graduate program focused on Indigenous knowledge systems and decolonization within public institution. She is an active language champion and learner of Hulquminum – the language born from the land she lives upon. She is grateful to her Elders and Knowledge Keepers who’ve been so generous with sharing their stories. Stephanie is grateful to Chief, Karole and those working to stop the discrimination against our Métis ancestors.

In 1875, the first and only numbered treaty between Canada and the Metis was signed as an adhesion to Treaty Three: In Ontario, mixed-ancestry people were dealt with in several ways. The Metis community at Fort Frances, which is now part of the Coochiching First Nation, signed an adhesion to Treaty 3 in 1875 as “Half-Breeds”  Compiled by Lawrence Barkwell Coordinator of Metis Heritage and History Research Louis Riel Institute