Born in 1925, near Rice Lake in Otonabee Township, Ontario, Donald is one of four children born to James Fowler and Grace Sedore. In true Metis tradition, the Fowlers moved often before settling in Kingston, and for Don, later in Brockville, where he raised his own family of three, one son, Malcolm, now age 59.

In 1939, Donald saw his father for the first time in a wartime military uniform with the rank of a “Gunner” in the RCHA. Donald also joined the army in 1940, and managed to visit his father a few times while in Great Britain. Don spent 5 years of infantry service with the 1st Bn, Stormont, Dundas, Glengarry Highlanders, re-enlisted in the Canadian Officers Training Contingent, at Queen’s university and  was  commissioned in the Royal Canadian Artillery, as an Intelligence Officer. He received many decorations and honours, including France’sChevalier de la Légion d’honneur (Knight of the Legion of Honour). Following university studies, a civilian, Donald worked at GTE for 30 years, in commercial telecommunications management.

It was after WWII, that Donald became interested in his Aboriginal ancestry and genealogy. In 1977, he discovered that his beloved great-grandmother—known to her peers as “Maggie,” was the great-granddaughter Jenny Mistigoose, daughter of Puckethwanisk, and wife of fur trader Robert Goodwin. Donald’s interest quickly developed into a lifetime passion, which led him to exploring the DNA testing world, of which he has gained an impressive understanding and shares generously.

On November 7th, 2018, on behalf of the MNOC, CFMPC, and our Métis citizens, Chief Dumont and Dianne Blackwell, the MNOC blanketed Lead Elder Fowler, thus honouring him for his life of dedication and sacrifices for his country and his people.  Don’s 93nd birthday would not have been complete without a small party and the gift of the official MNOC Métis sash and a suede feather carrier for his eagle feather.

"Thank you everyone for your kind wishes. I am deeply touched and humbled by this honour." (Don Fowler) 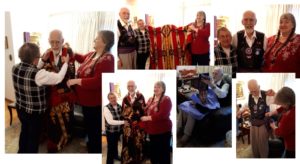 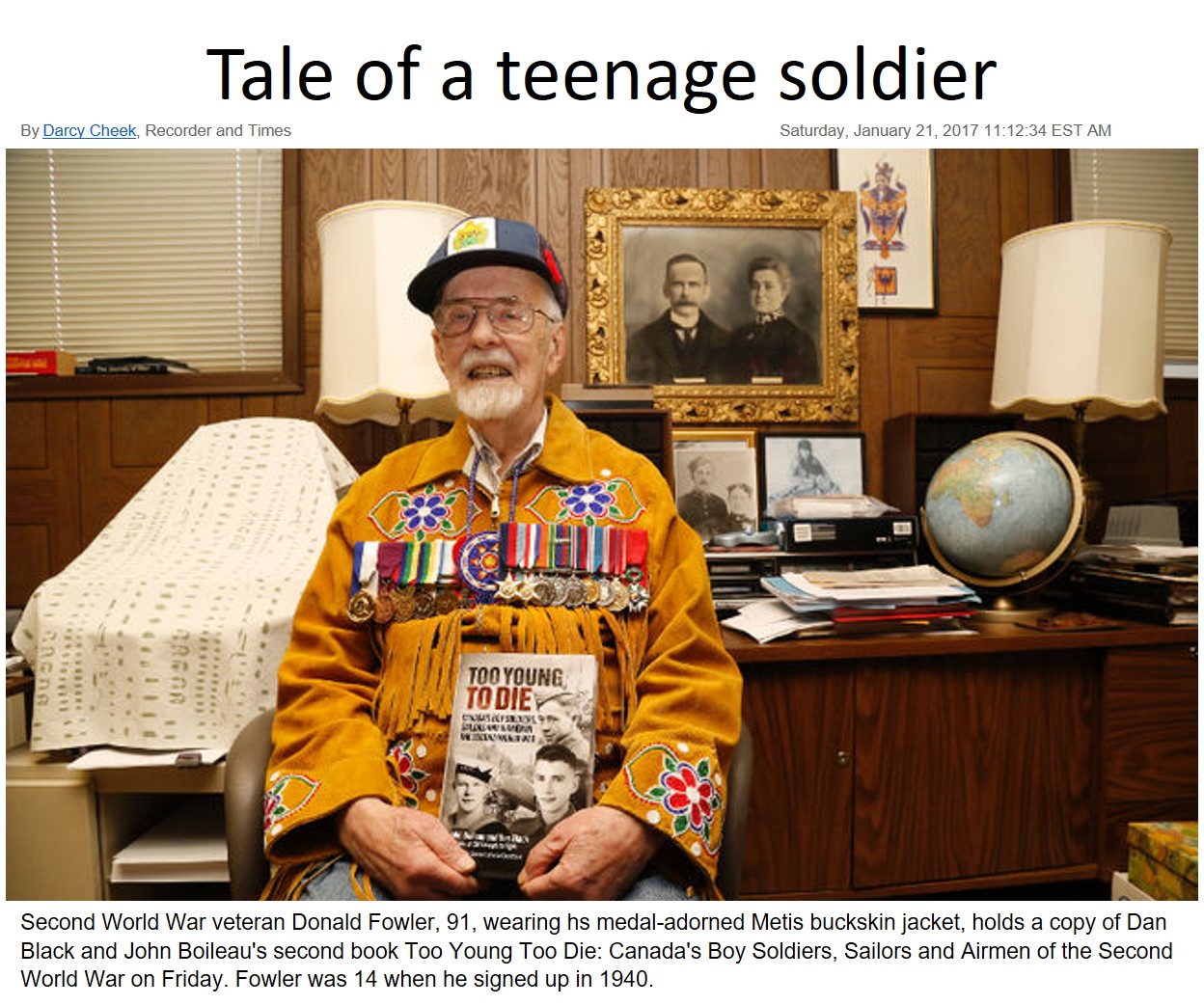 91-year-old veteran of World War II Donald Fowler, wearing a Métis buckskin vest with medals, holds a second copy of Dan Black and John Boileau: Too Young Too Die: Canada's Boy Soldiers, Sailors and Airmen of the Second World War. Fowler was 14 when he enrolled in 1940.

Tale of a teenage soldier By Darcy Cheek, Recorder and Times Saturday the 21st of January 2017 11h12am

Donald Fowler is living proof times didn’t change much from the First to the Second World War, and Dan Black and John Boileau make sure readers know why.

Fowler is one of close to 100 teenagers featured in Boileau and Black’s second book on underage Canadian servicemen – Too Young To Die: Canada’s Boy Soldiers, Sailors and Airmen of the Second World War. The first book was Old Enough To Fight: Canada’s Boy Soldiers of the First World War. Fowler, now 91, holds the distinction of being among the youngest of Canadians to join the armed forces, and merchant marine, not long after the start of the Second World War.

“There were two 14-year-olds, and I was one of them,” said Fowler from his Brockville home this week.

As many as 20,000 underage youth signed up for service in the First World War, and Black and Boileau estimate as many as 30,000 did the same for the Second World War.  In Fowler’s case, family history dating back generations had much to with his entry into the war, and the book attributes a visit by a soldier uncle for peaking his interest at a very young age. He also has a history or forefathers who served while young.

“My family is a military family going back to my great-grandfather, Samuel Fowler,” said Fowler, “By the time he was 18 he got a medal from the government for chasing off the Fenians.”

Fowler was a young bugler with the Princess of Wales Own Regiment in Kingston before he signed up for the Second World War in 1940.  After several years in England and Scotland he arrived at one of the Canadian landing zones at Juno Beach with a group of reinforcements with the First Battalion of the Stormont, Dundas and Glengarry Highlanders on June 12.   Black, a former Recorder and Times reporter from the 1980s and longtime editor of Legion magazine, knew Fowler from his time in Brockville. As soon as he and Boileau sat down to review possible candidates to feature in the book, Fowler’s service was soon evident.

“When we first began doing research for the book up in Ottawa Donn’s name was one of the first names I came across when I was going over the files at Library and Archives Canada,” said Black, noting he had a lengthy interview with Fowler in 2009.

The book weaves narrative from young servicemen like Fowler, follows their journeys from home to war, and explores the myriad of reasons they signed up so young.

“Most of them probably thought of it as their time, their opportunity to get over there and do what they could do to contribute to the war effort,” said Black.

Black said, without generalizing, many of the teenagers who signed up and survived did so without fear of the future.

“They had this attitude that they weren’t going to be the next guy. There were certainly a lot that feared death, feared that the next bullet could in fact be theirs, but I think a lot them went in with the attitude that, yeah, it’s not going to happen to me.”

Black says the content of the second book is more engaging, and somewhat three dimensional, because there was an opportunity to get first hand information from survivors or family members. Fowler was posted in Normandy, Belgium, Holland and Germany and served coincidentally in the war with his father, Herbert Fowler. He was not yet 20 when he came home in 1945.

“This was a nice opportunity with the second book to actually talk to veterans and sit down with them,” said Black from his Merrickville home.  “We’re sort of on the edge here with Second World War veterans and we’re losing them at an alarming rate.”

Fowler says both books are unique in the sense that they describe people and events that under ordinary circumstances should not have happened.

“The uniqueness of both books is that they are about people who were not qualified to be in a war,” said Fowler, adding he received more training than most because of affiliation with the Princess of Wales Own Regiment and he was able to attend the Connaught Range for weapons training.

Among his many honours, Fowler was presented with the French Legion of Honour, the highest decoration in France, has been to several D-Day ceremonies in Normandy and was one of 10 Metis veterans to attend the 2009 Remembrance Day memorial at the Vimy monument.

Black is a guest speaker at the Brockville Museum’s lecture series on February 28, where he will discuss primarily the first book as it has content pertaining to the battle of Vimy Ridge, which has a 100th anniversary this year.

Posted with permission from The Brockville Recorder and Times