FIRST SIGNATURE OF THE PARTNERSHIP TREATY Between the Council of the First Métis People of Canada and the Wik-Wam-Sŭn-Ŏté Aboriginal Community - Chiefs George LeBel & Karole Dumont, Signatories.

A special day and celebration for the Council of the First Métis People of Canada and the Wik-Wam-Sŭn-Ŏté Aboriginal Community with the signing of a historic partnership agreement. This treaty is the first of many that the Métis First Nation Council of Canada (CFMPC) is currently negotiating with Métis organizations whose members trace their Aboriginal roots in eastern Canada (from the Maritimes to northeastern Ontario).

Chief Dumont was honoured to represent the Council in Edmundston, New-Brunswick, and to meet many members of the community. That day was very special and the fulfillment of a lifelong dream of uniting Metis organisations to not only preserve our Metis identity, but also our culture and history. The rich mixed heritage we received from our Indigenous and non-Indigenous ancestors is our most precious possession. It represents who we are as a People, and it is primordial that our own descendants continue to maintain it alive and vibrant. 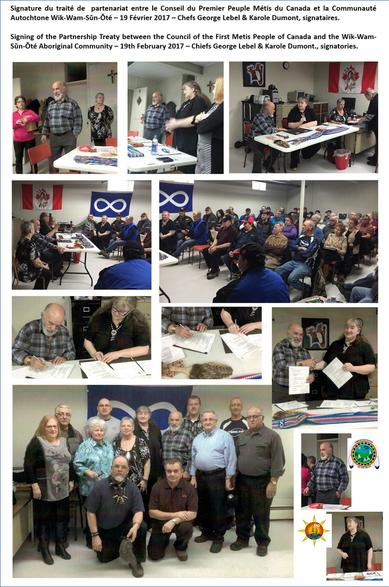 Celebrations from July 1, 2017 at the St-Basile Campground, New Brunswick.

NOTE: These settings will only apply to the browser and device you are currently using.

It is the site’s owner responsibility to act upon your request. When your data is anonymised you will receive an email confirmation.

We use cookies to improve your browsing experience. Continuing to use this site means you agree to our use of cookies.