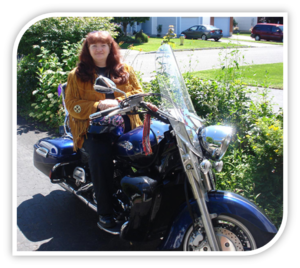 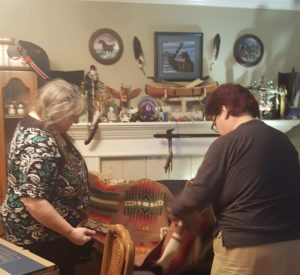 Born in Mattawa, Ontario, and raised in Quebec, Karole is a bilingual Métis author, genealogist, historian, artisan, artist, public speaker, and retired public servant (HRSDC & INAC). As chief of the CFMPC and now the MNOC, she has pledged an oath to serve the Metis to the best of her ability through her extensive expertise, knowledge, ethics and values, passion, and sheer determination.

A descendant of intrepid fur traders, explorers, soldiers, and French and Scottish pioneers and their indigenous spouses, Karole honors and strives to preserve their precious heritage. Among her earliest Métis ancestors were the children of the French and their Algonquin and Huron wives in New France (now Quebec), and Mik'Maq in Acadia. At the dawn of the 1800s, her ancestors pushed their fur-trading business westward, where they married mostly Ojibwa women. Her ancestor Allan MacDonell and her cousins ​​Grant were among the Métis involved in the confrontation at Seven Oaks (Seven Oaks), Manitoba. When the fur trade wars between their beloved North West Company and the Hudson Bay Company led to the merger, some of her ancestors returned to Lower Canada. Some settled in Mattawa, Ontario, others returned to Montreal and others settled elsewhere on the continent. Her ancestors Pierre Narcisse Dorion & Cecile Mawishk MacDonell are among the first Métis in Mattawa, where they were married by Father Bellefeuille in June 1837. Pierre and Cecile are considered a cornerstone of Mattawa; a Métis and Algonquin Community nestled at the meeting of the Ottawa and the Mattawa Rivers. The trading post where they lived is no longer part of Explorers Point, but Karole visits the site every year to reconnect to her many ancestors who beached their canoes there over the centuries.

From an early age and for most of her adult life, Karole has been involved in Métis topics and causes, serving under various titles, always seeking to assert Métis identity and rights across the country. Her intolerance for racism and discrimination led her to the creation of the CPPMC with 19 other leaders who are equally committed to ensuring the justice and recognition of all Métis on Turtle Island. Although duly elected Chief of the CPPMC, then of the MNOC following the 2018 amalgamation, she considers her role as that of equality in the Circle, not superior. She firmly believes in justice, respect, honor, integrity, and especially the power of the people..

She enjoys having benefited from the teachings of highly respected Elders and spiritual guides. She is a dedicated ambassador for the Métis people and her passion for history and genealogy often permeates her many historical novels and children's stories. She shares her spirituality and teachings with children, adults and seniors throughout her travels on Turtle Island, preferably by motorcycle. Although she follows the traditions and ceremonies of her Aboriginal ancestors, she respects and celebrates the cultural and traditional differences of Aboriginal and non-Aboriginal peoples, and welcomes everyone into the Circle. Like her native ancestors, she follows the Seven Sacred Teachings, or Seven Natural Laws (sometimes called Seven Truths or Seven Gifts): Love, Respect, Humility, Courage, Truth, Wisdom, and Honesty, which she considers the base of life and healthy spirituality.